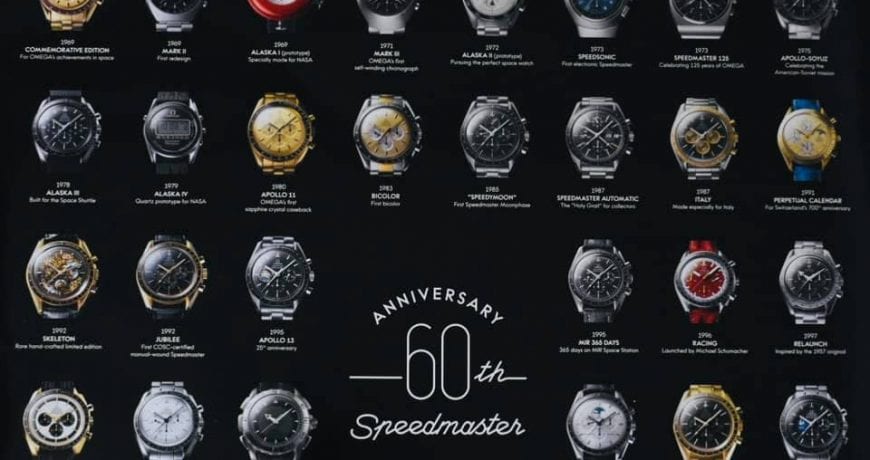 Omega Speedmaster is one of the most iconic watches ever made. The history of this timepiece started in 1957 as a racing and sports chronograph. As you might be aware, Omega is the official timekeeper for the Olympic games, which helped to promote the brand even more.

The first Omega Speedmaster was the CK2915, which looks more like the Railmaster than the most know Omega Speedmaster Professional, which was the first watch that landed on the moon and been part of all six lunar missions.

If you are looking to learn more about the iconic Omega Speedmaster, You are at the right place. There are 47 Omega Speedmaster listed at the Omega website for sale; however, not all are available new. Some of them are only available on the secondary market if you can find one.

There are many different types of Omega Speedmaster with the most popular Moonwatch. Some of the watches you will learn about are not in production; however, you will be able to purchase them on the secondary market.

The classic Speedmaster is 42mm powered by a manual wind that comes with an enormous box and some fantastic accessories.

There are four variations of this Omega Speedmaster Professional.

Omega Speedmaster Professional Chronograph 42mm with an open case back.

Omega Speedmaster Dark Side, Grey Side, and White Side of the Moon

If you are looking for a timepiece, which is a product of groundbreaking technologies, you should highly consider this timepiece. This Speedmaster is made from a single block of black zirconium oxide ceramic. It gives the watch an amazing look and feels when you are wearing it on your wrist.

Some of these Speedmasters have 18K Sedna™ gold used on its bezel, hands. If you are looking to get like a unique dial for your watch, the Meteorite dial is made from a solid piece of ancient, extra-terrestrial stone that has been acid etched to reveal a unique pattern on each watch.

There are 17 variations of Omega Speedmaster listed at Omega official site: Dark Side, Grey Side, and White Side of the Moon.

Omega Speedmaster Professional Chronograph 42mm with an open case back.

There is the Omega Speedmaster Co-Axial Master Chronometer Moonphase Chronograph 44,25mm, which is a great timepiece. This Speedmaster uses metallic crystal disc microstructured to obtain a great resolution image of the moon. This watch is powered by Caliber Omega 9904 with 60 hours of power reserve.

There are 13 variations of this Speedmaster Moonphase.

When it comes to limited editions, Omega has many of them, especially when it comes to Moonwatch. One of the most popular releases is “Snoopy,” the 45th Anniversary to Apollo 13th mission, OMEGA Co-Axial calibres 9300/9301 11 50th anniversary in stainless and gold.

These watches are highly collectible; they sold out very fast. If you ever want a limited edition, thinking that the watch will be in high demand, you should see what others have to say on watch forums or various watch blogs. That way, you can gauge if the watch will be popular or not.

The first Omega Speedmaster ’57 was introduced in 1957, and since then, the collection of these Speedmasters grow to 17 offered at the Omega website. The newest models still have a vintage look with broad arrow hands powered by the OMEGA Co-Axial calibres 9300/9301, which is the first exclusive in-house Co-Axial calibres to incorporate a chronograph function.

Omega Speedmaster racing has a total of 10 different variations. These watches are linked to Speedmaster’s motor racing heritage. The case size is 44.25mm, and the watches are powered by OMEGA Co-Axial Master Chronometer 9900. These are great watches with two subdials.

This Speedmaster was part of the ambitious project of flying around the Earth on a plane powered by solar energy. There are a total of three different variations of this timepiece. The case size is 44.25mm on a titanium case to make the watch light and strong as the plane created for the Earth’s flight. The watch is powered by Calibre Omega 3603, with 52 hours of power reserved and it’s self-winding.

The most popular as well the most expensive

The other Speedmaster lines such as Speedmaster 38, Speedmaster, X-33 Regatta, Skywalker X-33, and Spacemaster Z-33 are great timepieces as well. The watches mentioned are one of the more popular among collectors as well as people who would like to get their first Omega Speedmaster.

Finding the right luxury watch, which will make you happy is very important, but do you know that you should service your watch once a while? You should not be servicing your watches if they are keeping good time. But only if you noticed there moister in the dial or case back, the watch does not function as it should, it’s time to service your Speedmaster.

Here is the information from our blog post “How Much Does it Cost to Service My Watch.”

The alternative option is to find a local watchmaker who will be able to work on your Speedmaster. There are many great watchmakers in each state; all you have to do is research or lookup our blog post.

The best watchmakers in each state

When it comes to purchasing luxury watches, you always need to know who the seller is. If it’s an authorized dealer or Omega Boutique, you can be sure that you will get what you are paying for. If you want to save money and purchase Omega Speedmaster form a secondary market, you need to know who is selling the watch or what kind of platform you are using to purchase the watch.

By knowing what watch you would like to purchase, the journey to find the right timepiece began.

Omega Speedmasters are iconic watches with a strong following from Speedy Tuesdays to celebrating moon watch landing, timekeeping at Olympic games, and more.

By choosing any Omega mentioned above, you can be sure to pick the watch of the highest quality with precision. But if you can select only one, you can’t go wrong with the Omega Speedmaster Professional, a timeless timepiece.